The confidence to succeed in school 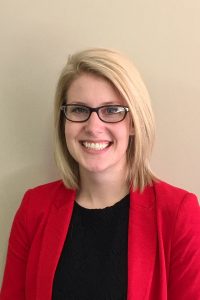 Staying motivated in court reporting school is a struggle that every student faces. Dealing with stress and hitting speed plateaus are common frustrations. This quarter, we spotlight Rachel Ellefson, RPR, a recent graduate of Des Moines Area Community College (DMACC) in Des Moines, Ill. who now works as an official reporter for the State of Iowa. Rachel has some advice for students: try to find the confidence to overcome self-doubt and practice, practice, practice!

Can you talk a little about your background? You already had a bachelor’s degree, correct, before you started at DMAAC? What made you decide to change careers to go into court reporting?

Right after high school, I went to a four-year college having no idea what I wanted to do with my life and earned my B.A. in business administration. After that, I started working in a business office at a local college, and it didn’t take long for me to realize that wasn’t something I wanted to do for the rest of my life. My mom is a court reporter, so court reporting is a profession I have always been familiar with. My mom and I went to an information session at DMACC about the court reporting program, and I was hooked.

Describe your practice routine while you were a student. How many hours a day did you practice?

My usual practice routine consisted of practicing dictation files my teacher had recorded during class and working on briefs. I also found it helpful to transcribe portions of dictation that I struggled with and just write them over and over until I could write it perfectly, and then I would write it again with the audio. Working through the difficult stuff made everything else seem easy.

I can’t really say how many hours a day I practiced because it was never the same. I am a believer in quality over quantity. Some days that meant I practiced for one hour, and some days three or four. For me, it was more important to get in quality, focused practice than to worry about getting in a certain amount of hours a day. I am also a believer in taking days off. Sometimes you just need to step away from your machine and relax.

Did you hit any speed plateaus while you were going through school? What advice do you have for students who get stuck at a particular speed?

I think a big thing about getting stuck at a speed is the hit it takes on your confidence. It’s so easy to become frustrated when you don’t pass a take, but you really have to stay confident. Don’t dwell on the takes you failed. Wake up and tell yourself every day that you can do it, and eventually you will start to believe it.

What were your biggest frustrations during your court reporting program? What kept you motivated along the way?

The biggest frustration I had during school is kind of a weird one. I worked very hard in school to get all of my required takes passed with plenty of time to spare before the semester ended. I was frustrated with having to continue to sit in speed classes I had already passed. At the time, DMACC was a brand-new program and didn’t have higher speed classes to sit in. I ended up using those times to work on shortening and cleaning up my writing, which I know has paid off in the long run.

My mom definitely kept me motivated during those times. As annoying as it was to have her ask me every single day if I had practiced and how it went, she really held me accountable.

You mention that DMACC was a brand-new program when you started. Can you give us a little context and tell us a little about what that was like?

DMACC announced their plan to add the court reporting program in late spring/early summer of 2014, and the first classes started in August of 2014, which meant they had a very short period of time to get the program going. So when I started court reporting school, we had a very small class, the court reporting program only had one instructor, and there were no second-year students, which meant no higher speed classes to sit in on and no survivors of the theory classes to talk to. However, the Iowa Court Reporters Association paired us with mentors, who were such a great support system.

By the start of my second year in school, DMACC had added instructors and the new class of theory students was full. DMACC and the Iowa Court Reporters Association really put in a lot of effort to get the program started, for which I am extremely grateful, and I am proud to say I was in the first court reporting class at DMACC.

Were you also balancing a family and/or a job during school? How did you manage that?

I waitressed one night during the week, in addition to Fridays and Saturdays, and also babysat one night a week. I knew going into the court reporting program that school needed to be my priority and that it would require a lot of time. At the same time, I wasn’t willing to quit working altogether and live on student loans, so when my parents offered to let me move back home to save money, I did. Doing so allowed me to only have to work about 15 hours a week and keep my focus on getting out of school.

Did you take any of your RPR legs while you were in school? What was that like?

I took a literary test during my last semester in school, and it was terrible. It was after that I realized it was going to be an adjustment taking tests online. It was so different from what I was used to in school. I was used to live dictation and watching the speakers, which made the transition to the RPR tests difficult for me. I wish I hadn’t developed a habit of looking at the speakers.

How did you find your first job?

I knew when I started court reporting school that I wanted to work as an official for the State of Iowa. Iowa pays well, it has great benefits, and officials get six months to earn their certification. So once I passed my last take at school, I went to the Iowa Judicial Branch website, looked at my options, found the job I wanted, and within the next month, I started my career.

What is the best thing about being a court reporter? What is the hardest?

Court reporting is pretty sweet. Making a verbatim record at 225 words per minute is not something just anyone can do, and I take a lot of pride in my ability to do that. I also like that I’m not listening to the same thing every day.

Going into court reporting, I really thought asking people to slow down or speak up would be the hardest thing, but I got over that pretty quickly. I think the hardest thing is taking down the testimony of someone who mumbles.

Have you ever attended any state or national conventions?

I attended parts of the past two Iowa conventions. I really enjoyed them. Court reporters love students. People were always coming up to us and asking how school was going and telling us about their experiences. Conventions are a really great way to network.

Do you have any advice for students trying to make it through court reporting schools today?

Published in Career, Getting Through School, People, Student and Up-to-Speed