Wyrick wows the crowd during the Premier Session keynote 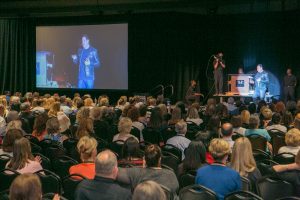 Steve Wyrick, known as the Daredevil Magician, brought some extra-special magic to the 2017 NCRA Convention & Expo during his keynote address at the Premier Session. He performed several illusions, including bringing Ms. Pac-Man to life from an old video game console, linking together three rings provided by members of the audience, and turning a $100 bill into a $1 bill – and back again, to the relief of the attendee who had supplied the original $100.

Unfortunately, Planet Hollywood (along with Paris and Bally’s) lost power for a couple hours during Wyrick’s presentation, but when the lights came back on, attendees had the opportunity to see the rest of the show.

The grand finale of Wyrick’s performance was essentially a “steno mad libs.” Wyrick told a fictional story of a couple court reporters who had snuck out to a casino on the Strip, had a good time, and came back late the next day. Members of the audience predicted the names of the reporters, the casino, their preferred drink, and the time the reporters returned. In the midst of this, Wyrick talked about an alleged Aunt Mable who had been a reporter and said he’d become interested in steno and went on YouTube to teach himself how to write in steno. He drew the audience’s attention to a box that had been hanging from the ceiling. When the story was complete, he brought the box down and, to the audience’s delight, he pulled out a ream of steno paper with the audience’s predictions to the story written in steno. 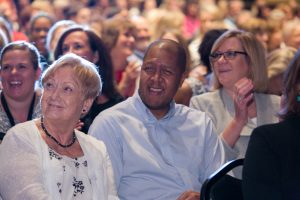 Other highlights of the Premier Session included the recognition of international attendees from eight different countries, certification holders, and past presidents. Joanne Lee, RPR, a Florida reporter who works with Esquire Deposition Solutions (the Premier Session sponsor), provided an update on the work that the company has been doing to help students successfully complete online programs and to get millennials more involved in the profession. NCRA’s 2017-2018 Board of Directors was installed, including NCRA Immediate Past President Tiva Wood, FAPR, RDR, CMRS, being magically transformed into NCRA President Chris Willette, RDR, CRR, CRC. Ed Johnson, FAPR, RPR, CRR, introduced his fellow Wisconsinite with a top ten list of “things you may not know about Chris Willette,” including a quip that in a Speed Contest, if the topic was cheese, Willette could beat Mark Kislingbury, FAPR, RDR, CRR. Willette gave her first address to the membership, which focused on the importance of hard work, service, and perseverance. And Nancy Varallo, FAPR, RDR, CRR, was recognized as the 2017 Distinguished Service Award recipient. As she accepted the award, Varallo thanked all of her mentors who have helped her get to this point.

Read all the news from the 2017 NCRA Convention & Expo.