The JCR Weekly recently learned that NCRA member Joshua Edwards has a passion for singing and reached out to learn more about what motivates this CART captioner and court reporter from New York, N.Y. 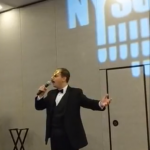 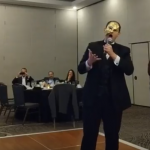 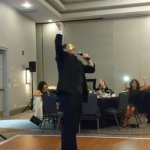 Being a professional Broadway singer was the dream that brought me to New York 10 years ago. And the dream never dies. However, I knew that I did not want to follow the typical path that most aspiring singer-actors follow – a waiter or always working nightshift jobs. On a friend’s recommendation, I discovered court reporting school. That ended up being a wonderful path for me. I finished school in December 2010 and started taking depositions in New York City right away. Five years flew by. Then I applied for a job in federal court as an official reporter and spent one year there. A major reason I did not want to stay in court is that I felt like I would not have free time to pursue my artistic interests. Auditions for musicals and tours, for example, start at 9 in the morning. If you work a full-time day job, you will never have the opportunity to attend auditions. After leaving my court position, I became a CART captioner, which is now my full‑time job.

Both of my mother’s parents were music lovers. My grandfather was a minister of music in his church. I never got to hear him live, but we do have a few rare recordings of him singing church hymns. My grandmother used to love to hear me sing some of those hymns.

I only started taking lessons in college. My major was vocal performance. Part of the bachelor’s degree was to take diction classes for the four major sung languages: English, German, French, and Italian. We learned how to analyze words according to the International Phonetic Alphabet. When you study music, the foundation is usually classical. In singing you start with the five pure Italian vowels ah, eh, ee, oh, and uu. In Italian, the word for “but” is “ma.” It should be pronounced with a pure tall “ah” sound like the word “mom.” In English we have sloppier vowel constructions like “my.” That’s a combination of “ma” and “ee,” or a diphthong. But no court reporter would write the word “my” in two strokes PHA/AOE. Even more complicated are triphthongs like “our,” comprised of a-uu-er, which mercifully is written in one stroke. So to me, the study of singing in foreign languages is incredibly similar to the study of writing in steno.

Even though I learned to sing operatic arias from composers like Mozart and Puccini, my favorite music to sing is classic Broadway. The singer blends a strong trained voice with more contemporary music. I’ve performed in many plays and musicals — and even some operas. Two performances that stand out are being invited to sing “Nessun Dorma” in a packed courtroom when I was a federal reporter, and then entertaining our state convention attendees last month as the Phantom of the Opera singing “Music of the Night.” Watch the video.

Singing is incredibly rewarding. Singing, music, and any visual or other manner of art connect people on a higher plane in an otherwise chaotic world that is basically a cycle of life and death. Why do we as human beings enjoy things like good food, music, sports, entertainment, and other things which I won’t mention in this article? They make life worth living.