Captioner gets bird’s-eye view of supercross 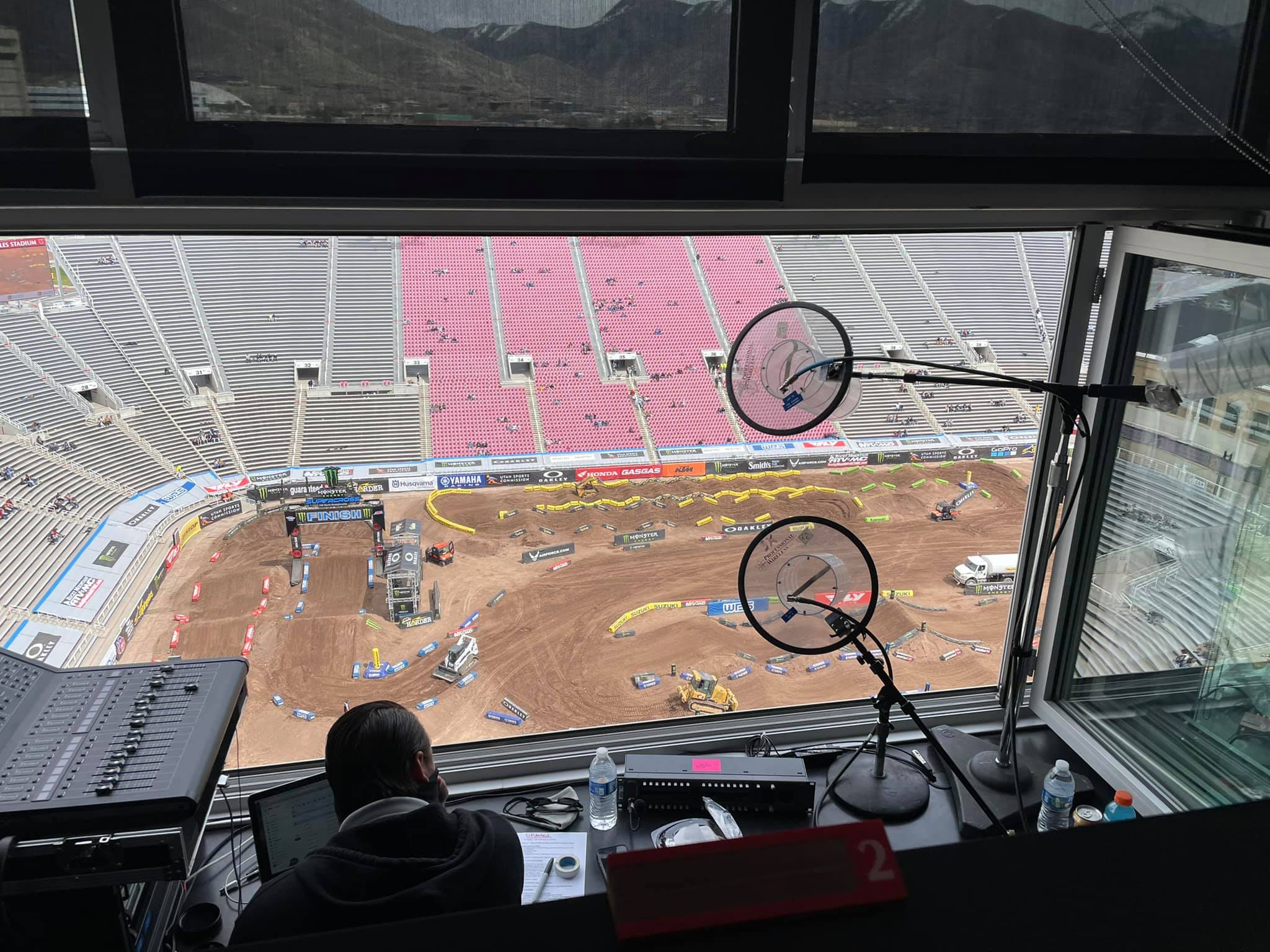 Supercross may sound like an intense CrossFit workout, but it was just another in a string of exciting captioning jobs for freelancer Phoebe Moorhead, RPR, CRR, of North Ogden, Utah. The indoor motorcycle racing event, an adaptation of motocross, took place at the University of Utah in Salt Lake City last month. “Somebody pinch me,” Moorhead posted on Facebook about the event. “My job is the coolest. I’ve done a lot of cool things with work, but this one was so fun!”

The supercross assignment was a referral from Moorhead’s friend and mentor, captioner Cecilee Wilson, RDR, CRR, CRC, of Kaysville, Utah. “I had a bird’s-eye view of the track and sat right next to the race announcers in a skybox,” Moorhead said. “The race was fast-paced and so exciting! Before captioning it, I had never even seen a supercross race. But by the end, I had a favorite racer and was cheering him on!” Even with her years of experience, Moorhead still gets the jitters before certain jobs.

“My biggest hurdle in my career has always been controlling my nerves, and supercross was no exception,” she said. “Every time I have an upcoming job doing something I haven’t done before, I’m a ball of stress. But within minutes of being there, I settle in and then wonder why I always get so worked up. I think a lot of us can relate.”

Moorhead, who also works as both a court reporter and a captioner, attended court reporting school at Metropolitan College of Court Reporting in Phoenix, Ariz., immediately after graduating high school. “One of my first CART jobs was for the ADA compliance director of FEMA at the FBI headquarters in Quantico, Va. Because I also know sign language, she took me to lunch, and we had a wonderful time getting to know each other. I’ve had the chance to caption Lin-Manuel Miranda, the creative genius behind Hamilton, during a presentation he gave at Sundance in Park City, Utah, and an attendee who is hard-of-hearing gave me a commemorative Sundance keychain as a thank-you gift. Those small tokens of appreciation will stick with me forever.”

Moorhead has a personal connection to the deaf and hard-of-hearing community. Both of her parents are deaf, and ASL was her first language. “In high school, when trying to decide what I wanted to be when I grew up, my father invited me to one of his classes in his master’s program. He is deaf and had a CART provider with him during school. I saw what she did and was captivated. I knew instantly that’s what I wanted to do.”

“Captioning is more than just providing a service,” she added. “What we do is so important to the deaf and hard-of-hearing communities.” Last year, Moorhead captioned the Utah House of Representative debate that led to a resolution encouraging the use of captions on televisions in public venues. Her parents were able to watch her caption the session.

Being a part of that event has been Moorhead’s best professional experience so far. “My next favorite experience,” she said, “is one that I’ve been sworn to secrecy about. That in and of itself makes it the best!”

Published in Captioning, Members in Action, News and People