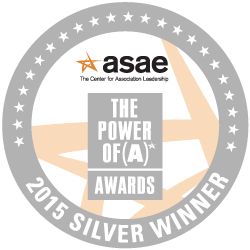 NCRA’s Take Note Campaign has been awarded a 2015 Power of A Silver Award by the American Society of Association Executives. The campaign was recognized for providing high school students and their parents and guidance counselors with education about the role of court reporters, as well as career benefits.

“Congratulations to the NCRA for helping make the world a better place,” said Hugh “Mac” Cannon, MPA, CAE, executive director of the American Council of Engineering Companies of Metropolitan Washington, D.C., and chair of the Power of A Awards Judging Committee, in a press release announcing the honors. “Their story exemplifies how associations make a difference every day – not just to the industry or profession they represent, but to society at large.”

The Take Note campaign was also recognized for helping to ensure that future court proceedings have the most accurate transcripts available, as well as for improving individual lives by reducing the amount of personal student debt, and national debt, by offering affordable education opportunities.

Earlier this year, the Florida Public Relations Association named NCRA’s Take Note Campaign first in the public relations division of its annual Image Awards. The public relations division of FPRA’s Image Awards considers how a program has improved an organization’s image in the community, informed and educated the public about an issue, created a public image for an organization, and successfully worked to inform or influence target markets audiences through the use of the news. The Take Note Campaign placed first in all four areas of the division.

NCRA’s Take Note Campaign is being handled by the Florida-based public relations firm BowStern. The firm applied for the award on behalf of NCRA.

More information about the campaign can be found at crTakeNote.com.