Tips, tricks, and the latest in trends shared with attendees at 2015 NCRA Convention & Expo 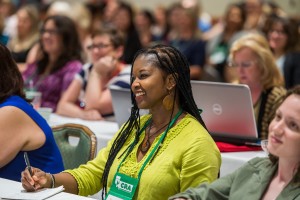 The wide array of sessions and presentations adorned with tips and tricks as well as the latest in trends at the 2015 NCRA Convention & Expo, held July 30-Aug. 2 in New York City, provided the nearly 1,200 attendees with a varied selection of educational choices.

NCRA member Gail Verbano, RDR, CRR, a freelance reporter from Boothwyn, Pa., led a lively discussion of what-if scenarios in a session called 25 Years On-the-Job Training in One Seminar, as part of the Judicial Track. Attendees discussed what to do when people speak too fast, if a lawyer answers for a witness or says ‘strike that,’ or asks the court reporter to leave a blank in the transcript. Other scenarios discussed included how to handle interpreters when witnesses answer in English and when and how to interrupt.

She also shared pointers from 25 years of being on the job, tips for producing cleaner writing, and a glimpse into what she packs in her case each time she takes on a realtime job.

According to Verbano, “we try to protect the record, but we can’t make the record.”

Captioners Linda Hershey, RDR, CRR, CBC, CCP; Jennifer Schuck, RDR, CRR, CBC, CCP; and Steve Clark, along with sign language interpreters Jana Owens and Rita Jo Scarcella, led on a panel entitled You Don’t Know What You Don’t Know – Ethically Speaking, as part of the Realtime Track. The members were representing CART Ethics Task Force, which was charged with creating a NCRA Code of Professional Ethics for CART and Broadcast Captioners, recognizing that the ethical issues that captioners face are often different than those faced by judicial reporters.

According to the presenters, many elements of the captioning NCRA Code of Professional Ethics for CART and Broadcast Captioners are similar to those on the judicial side. Some of the important differences are the higher emphasis on confidentiality and privacy, concerns about working with a minor rather than an adult, or the difference between a file and a transcript (which Schuck wrote about in the July 2015 issue of the JCR).

Audience questions also promoted a discussion on issues related to accessibility and advocacy.

The Task Force submitted the NCRA Code of Professional Ethics for CART and Broadcast Captioners for the NCRA Board of Directors’ approval and has gone to the next step towards implementation. Look for more information in the near future.

Bruce Balmer, CLVS, led a practical session on video files in legal videography where he reviewed the different types of video files currently used in the industry. During the session entitled I Have a Video File, but What Should I Give My Client? as part of the Business Track, Balmer said that authored DVDs are the most common formats, but predicted that MPEG-4 will become more common in the future. He pointed out that if videographers offer other formats – including multiple MPEG versions and synced versions of all formats – then clients will ask for them.

Balmer also provided a step-by-step demonstration of the TMPGEnc Video Mastering Works software, which is the industry standard for converting from the video source.

A wide range of national and international court reporting educators attended Motivating, Coaching, and Mentoring for Student Success, a session led by Marybeth Everhart, RPR, CRI, CPE, and Karen Sole, RPR, CRI, CPE, which was part of the Teachers’ Workshop. Everhart and Sole began the session with a puzzle to encourage creative thinking and discourage the mindset of “that’s the way we’ve always done it” or “this is how we did it when I went to school.”

Everhart reminded attendees, “What we’re training our students to do is really difficult,” and it can be tempting for a student to fall under the trap of thinking, I’m not progressing because of the way the school or program is run. In court reporting, the honeymoon phase ends quickly, especially in theory. While instructors should find ways to provide their students with regular individualized feedback and support, at the end of the day, students need to spend the time in school thinking and behaving like their future profession. This includes tracking and assessing their own progress and connecting with their local, state, and national court reporting communities.

Maureen Walsh, CLVS, and Chris Willette, RDR, CRR, CCP, teamed up to show the strengths of court reporters and legal videographers working together in the deposition setting during The Reporter and the Videographer Partnership, a session included as part of the Business Track. Walsh and Willette shared the workflow before, during, and after a deposition for both court reporters and legal videographers, as well as which certifications to look for and the types of questions to ask to find the right teammate. Both presenters emphasized the importance of using a CLVS, citing the quality of the CLVS Seminar and the rigorous exam. Walsh explained that, unlike any other legal videography organization, the NCRA program was developed specifically to help CLVSs support court reporters.

Marilynn Larkin from PosturAbility presented a session entitled Power Up Your Posture where she noted that good posture involves the entire body, that it’s dynamic and interactive, and that it can help relieve some body problems while preventing others, like back soreness. Attendees had the opportunity to practice specific stretches, both sitting and standing, to do before or during work, while Larkin continually reminded everyone to breathe and keep their shoulders down and core activated. She also reminded attendees to make their environment work for them rather than trying to fit themselves into the environment, offering tips like asking for a different chair if necessary or wearing comfortable clothing. The session was part of the Judicial Track.

Members who are interested in Larkin’s session can view her two-part series of posture available in the NCRA e-seminar library.

As part of the Realtime Track, Brenda Brueggemann, a professor at the University of Louisville and a CART consumer, led a discussion-based session entitled Composing Sound – A Workshop on Creative and Critical Thinking. Part of the session focused on adding “flavor” while captioning, an issue that was well-illustrated during the session itself. After attendees discussed a series of high-level questions about captioning in small groups, Brueggemann said that for a group in the back, she could hear words from the discussion, but she had no idea what the tone of the discussion had been. When one participant from the group said that they had been confused by the questions, Brueggemann said that the word confusion added just the right amount of context to interpret the words better. The attendees discussed the difficulty in adding flavor while captioning, first because captioners are so focused on capturing the words that it can be difficult to also catch ambiance, and also because it can be difficult to avoid using personal judgment while trying to add in flavor. One example would be how to describe background music while captioning.

Brueggemann also pointed out that sound studies are garnering more attention in the university and that recently captioning has been seen as an integral part of video rather than an afterthought.

During a session entitled Best Practices for Remote Reporting, NCRA members and Realtime Systems Administrator certificate holders, Robin Nodland, RDR, CRR, and Christine Phipps, RPR, attendees were provided with an overview of what remote reporting is and what it is not, why best practices are needed to ensure quality realtime is provided, and what business models currently exist in the realtime world.

Nodland and Phipps also shared best practices as they relate to protocols for attendees and working with audio proceedings.