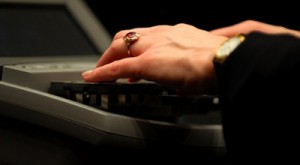 In September 2015, New York Governor Andrew Cuomo signed bill S5533-B, referred to as the CART bill, which expands provisions to enable people who are deaf or hard of hearing with access to court proceedings.

NCRA member Adam H. Alweis, RPR, a senior court reporter from Syracuse, N.Y., and a board member for the New York State Court Reporters Association, provided the following information on what the CART bill was, the events leading up to its signing, and how the bill may be implemented in the New York courts.

The JCR first wrote about the CART bill in July.

The CART (Communication Access Realtime Translation) bill was created by the Association of Surrogates and Supreme Court Reporters union down in New York City, namely, President Brian DiGiovanna, RPR, CRR, CMRS, and Legislative Chairperson John Cardillo, as well as the NYSCRA Legislative Chairperson Myron Calderon. These individuals deserve high praise for their efforts in this regard.

The bill provides for having a realtime court reporter present in any situation within the court system where a juror, litigant, judge, family member, etc. who is deaf or hard of hearing is in need of realtime access in order to be more fully able to participate in the proceedings in compliance with the Americans with Disabilities Act.

New York State Senator John DeFrancisco was approached by DiGiovanna initially to put forward this bill in the New York state legislature. Both Sen. DeFrancisco and Assemblyperson Helene Weinstein sponsored the bill, which eventually passed through both houses.

In July, DiGiovanna had contacted me in Syracuse about doing a press conference to outline for the press and the public what this bill’s intentions were and its positive impact on the deaf and hard-of-hearing communities. After meeting with the senator’s staff, along with their assistance, we set up a wireless realtime demonstration for the press conference using two iPads for display to the audience.

The press conference occurred in late July in the Onondaga County Courthouse in Syracuse. Sen. DeFrancisco spoke to those who attended along with a representative from the hard-of-hearing community. A sign language interpreter was also present. At the end of the conference, I gave a brief outline as to how the realtime worked using a wireless Internet device.

The following would be my understanding on how this will work. Those working in the New York state courts should check with their individual supervisors for more information.

For a juror who is deaf or hard of hearing, a realtime court reporter will have to shadow that juror throughout his or her participation in the proceedings. What that means is that, most likely, you would need two court reporters in the courtroom at the same time: one who is recording the proceedings and the other who is shadowing the juror.

As far as litigants in need for realtime, I would imagine that would be handled by the supervisors in each office as to how to implement that.

If you have any more questions, don’t hesitate to contact the officers and directors of NYSCRA and/or the officers of the ASSCR.