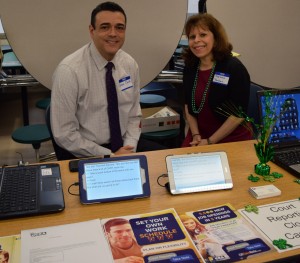 More and more court reporters and captioners have realized the value in attending career fairs as a way to promote the profession. Most recently, Darlene Parker, RPR, a broadcast captioner, and Steve Clark, CRC, a CART captioner, presented at South Lakes High School in Reston, Va., on March 17. Because the high school is so close to NCRA headquarters, a staff member was able to join them.

“Presenting at this year’s career fair at South Lakes High School was a great opportunity to showcase our skills and professionalism of court reporters, broadcast captioners, and CART captioners,” said Clark. “Working as a team, we presented all sides of the professional – the management and training, as exemplified by Darlene Parker of NCI; the support, certification, and advocacy by our professional organization, thanks to Megan Rogers, NCRA’s Communications Assurance Specialist; and the skills and technical side of captioning as displayed by my live demonstration.”

Parker, whose son is a junior at the high school, noticed a call for volunteers for the fair, which was held for sophomores. “When I contacted the school,” she said, “they were thrilled to hear from me. The woman said she had been trying for years to get someone to represent the court reporting profession.” She asked Clark to help her with the presentation, especially with giving a practical demonstration. They set up a table with a couple laptops — one of which played the award-winning promotional video produced for the Take Note campaign on a loop and the other connected to Clark’s realtime feed — as well as a couple tablets wirelessly connected to the realtime feed. The table also offered fliers and posters with more information. 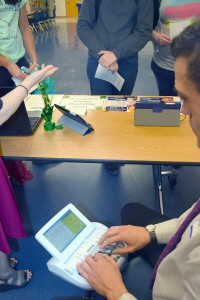 “The kids were fascinated by the realtime we displayed,” Parker noted. “One girl’s jaw dropped, and she did not close her mouth until the demo concluded.” Parker noted it was helpful to have someone to talk about the profession (possibly in front of the table to draw kids in) and someone to write live. She said it’s important for the steno machine to be visible. “Ask the kids what their names are and write them,” she said. “They love that.”

Parker had reached out to NCRA for materials, noting, “Consult NCRA’s website for helpful handouts, including fun facts.” And there’s no end to the amount of information to share with the students.

“Explain how the machine works and highlight that 5,500 jobs need to be filled in the next few years. Highlight all the different venues a court reporter/captioner can work in — as an official, a freelancer taking depositions, reporting the United States House of Representatives or United States Senate floor and committee proceedings, as a remote or onsite CART captioner for an individual in the classroom or workplace and/or at conventions, as a remote broadcast captioner, as a remote or in-stadium or in-arena captioner, and finally as a captioner in theaters. Mention that most positions offer a flexible schedule and the ability to work from home. Mention that it is a great profession for those who like words and technology,” said Parker. “And last, but not least, mention the return on investment — two to three years of schooling for an excellent salary and a rewarding career.”

Ruth Levy, RPR, a freelancer in Richmond, Va., who has recently reached out to NCRA for materials, commented on how important it is to promote the profession at these venues specifically.

“When I was a sophomore in high school, a court reporter came to my typing class and spoke about being a court reporter,” said Levy. “She asked if we liked to type. She asked if we were good at playing any instruments. She asked if we liked LA Law. I raised my hand for every question. A light bulb went off, and I knew right then and there I would love to be a court reporter.” Levy has been in contact with “a local high school that does more legal assistant and technical courses,” but she’s no stranger to promoting the profession. “While I was [attending the Academy of Court Reporting] and finishing up, I would travel with the career placement adviser and speak to high school students about being a court reporter. She would talk, and I would demonstrate,” said Levy. “It was a great feeling to pay forward what I learned in my 10th grade typing class.”

Erminia Uviedo, RMR, CRR, a freelancer in San Antonio, Texas, who has participated in more than a dozen career fairs since November, echoed Levy’s sentiments: “Just like we at one time had someone enter our classroom, sit down at a little-known type of machine, spooling out little white paper covered in lettered ink, that piqued our interest then, we must remember that feeling of when our dream began, what sparked our interests, what made us go out and seek a court reporting school. We need to remember how all it took was that one person to demonstrate machine shorthand to realize that’s exactly what we wanted to do as a career and how it has lead us to the point that we are now.”

“When attending career fairs, we have learned that the next generation is technologically savvy and quite ambitious. Many are articulate and looking for a profession that provides perpetual education and holds their attention,” said Thompson. “They are captivated with our cool keyboards and are intrigued with the ability we have to write at the speed of sound. They quickly sit behind our writers and get so excited when we show them how to write their names. They squeal with joy as their names scroll across the computer screen as their friends watch.” Thompson noted that “the excitement of a career fair is almost as exciting as attending a national convention” and that she finds that it “rejuvenates our excitement in the profession.”

Salas added, “I think it’s extremely valuable in promoting court reporting because it’s a very rewarding career. To be able to always have front row seats in people’s lives is a privilege.” She’s also noticed that career fairs are a good place to help people see the connection between court reporting and captioning: “I’ve realized that not many people have the knowledge of knowing what closed-captioning and CART are really all about and that these two avenues are roads of the court reporting profession.”

“I have learned that nine times out of 10, your audience — teachers, counselors, parents, or high school students — will be always be amazed with a realtime demonstration. Out of all the careers or schools spotlighted at career fairs, court reporting is always one of the most popular. The machine does most of the attracting on its own,” said Uviedo.

Based on her experience, she has several practical tips for others who are interested in putting on a career fair: “Have a nice Trifold display board and plenty of handouts. Make sure there are websites, Facebook pages, or Twitter profiles for them to easily be able to search for online. The ideal amount for a successful fair is four court reporters: two to reel the audience in, and two to demonstrate realtime on their machines.” Parker and Clark chose to keep the steno machine in sight but behind the table to protect it, but Uviedo recommends having the machine front and center. “Always let the audience sit at the machine and be very hands-on. Always let the students take selfies of themselves on the machine. They will do the advertising for us, easily reaching hundreds of others who will hopefully be interested in what kind of machine did they just see a picture of, engaging them to comment on what it is, where to find out about court reporting, etc.” Uviedo has also combined forces with San Antonio College’s court reporting program. “Always have sign-in sheets. And when there is an open house coming up, mass text everyone on the sign-in sheets to invite them to the open house,” she said, so students can easily take the next step.

NCRA members who are interested in presenting at career fairs have a variety of resources available from the Association. The Resource Center at crTakeNote.com has fliers, posters, a PowerPoint presentation, and a promotional video (both generic and customizable for a specific program, etc.). Members may also find value in the resources at NCRA.org/Awareness. These materials are focused on Court Reporting & Captioning Week, but members can adapt them for other promotional purposes or to find ideas for how to showcase court reporting and captioning. Members who do participate in career fairs or any other promotional activities are encouraged to contact Annemarie Roketenetz, NCRA Communications Manager, at aroketenetz@ncra.org for possible inclusion in the JCR. Keep in mind that any photos will likely need to hide any identifying features of minors, especially faces.