By Monette Benoit and Anthony Frisolone

They say, “The lights shine brightly on Broadway.” Those people have obviously never been inside a courtroom in New York City where on most days, high drama plays out across the city, and the official court reporters of the federal and state courts are there to cover every word of the action! 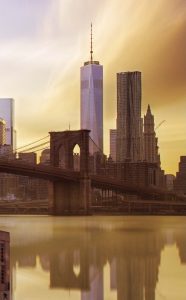 Just south and east from the stages of Broadway, in Brooklyn, N.Y., at the foot of the Brooklyn Bridge, sits the United States District Court for the Eastern District of New York (EDNY), where many high-profile cases have taken place. The variety of cases heard there are as diverse as the city itself — organized crime, terrorism, securities fraud, and complex civil cases — and have resulted in many thousands of pages of transcript produced by EDNY’s court reporting staff. Open the local papers or scan the headlines and the names are familiar — Martin Skhreli, John Gotti, Peter Gaitien, Najibullah Zazi, and many others who have all come through these doors of what was once described as a “little country court.”

How does an official reporter or a staff of reporters handle a high-profile federal trial proceeding? Let’s explore some of the procedures that are employed by the EDNY reporters to ensure a successful trial. Initially, after a criminal defendant is charged and arraigned, or a civil case is filed, a district judge is assigned the case via “the wheel.” The wheel is a random selection process to spread the workload amongst all members of the Eastern District Bench. Federal courts also employ magistrate judges who work with the district judges. Their role is to handle discovery issues for the district judge. Magistrates can also take change of plea proceedings and may conduct evidentiary hearings.

The reporters in EDNY work on an approximate 20-week rotating basis, meaning each official serves with a judge for five days, then the reporter moves to the next judge in the schedule. In the context of a trial, the reporter assigned to the court is the principal for that week, who is then assisted by members of the court reporting staff who may have a light calendar and may be available to help the principal.

In EDNY, the staff works in teams of three reporters. Each reporter takes a one-hour portion of the trial, is then relieved by the next reporter, and then the next. This allows the first reporter, the principal, one to two hours to transcribe their portion — depending on how the trial day is divided. Relief times are adjusted according to delays in the proceedings or a shortened or elongated trial day. The goal is that each member of the trial team gets a close-to-equal share of the trial as the other members of the team.

The duties of the principal reporter for the case include: keeping track of each assisting reporter on a case, tracking everyone’s pages using a tally sheet, and communicating with the parties to obtain correct ‘order’ information. A majority of the trials that the reporters cover are ordered as a daily or an immediate copy, so teamwork and communication are the keys to success. The reporters also handle their own production of transcripts, which includes printing and binding of transcripts as well as emailing, troubleshooting realtime connections, billing parties, and paying the assisting reporters. It’s not unusual for one reporter to be underneath a desk troubleshooting a connection while another reporter is writing.

Preparation for a high-profile trial, or any trial, begins with solid preparation. Usually, on Thursday or Friday before each case begins, the principal reporter will create a glossary of terms for the case by scanning the Electronic Case Filing system that the federal courts employ.

We also try to work with the attorneys on each case to get a witness list and possibly a CD or any bindings of any exhibits that will be used during trial. In criminal cases, we understandably won’t receive that information until the day of trial due to rules that the U.S. Attorney’s Office has set as well as the Section 3500 obligations. Once the glossary is complete, it is then distributed amongst the staff members. In cases where technical terms or foreign names will be mentioned, we will research and double-check for the correct spelling.

Sometimes, additional research is required to ensure transcript accuracy. Preparation is made easier thanks to some of the case preparation features now found in our CAT software. These functionalities allow for the analysis of transcripts, and then from the lists, we can build those words into our job dictionaries.

Since the EDNY has the largest terrorism docket in the United States, this is especially important since a majority of cases involve military terms, foreign names, foreign locations, and other foreign terminology. Just as an example, there are at least six ways to spell Mohammed. In one trial, there were two defendants named Sayed and Said as well as a witness named Sayeed — all of them pronounced SIGH-eed.

In terrorism cases, it is required that district official reporters also obtain TS/SCI security clearance in order to report classified proceedings under the Classified Information Procedures Act. TS/SCI stands for Top Secret/Secured Compartmentalized Information. The process for receiving this clearance requires an extensive background check, as well as interviews of each candidate, friends, and past employers.

When realtime is provided, we use a switch box with four connections for the officials to connect their computers and equipment. At the beginning of each day, at least two reporters connect their computers to the switch box. Now, when switching takes place, we do what’s called
a “silent switch” where the switch occurs on the next question. The switch is signaled by a nod of the head or even a tap on the shoulder. When this occurs, the first reporter stops writing and the second starts. In the realtime context, the first reporter then moves the switch box to the letter on the box that the relief reporters have assigned themselves. You know that the switch is truly silent when no one notices us entering or leaving the courtroom!

This is just a quick sketch of how one courthouse handles big cases. The truth is that we handle every case like it is a big case because that’s what we require of ourselves.

Monette Benoit, CRI, CPE, B.A., who is based in San Antonio, Texas, is a captioner and agency owner as well as an author of several books. She can be reached through her blog at monettebenoit.com.

Anthony D. Frisolone, FAPR, RDR, CRR, CRC, CRI, is an official court reporter in the Eastern District of New York. He can be reached at AFrisolone@aol.com. He expresses his appreciation of the 25 official court reporters in the Eastern District of New York who, he says, “are some of the most talented and hard-working reporters I’ve ever had the privilege to work with, and this is why I keep showing up to work every day!”