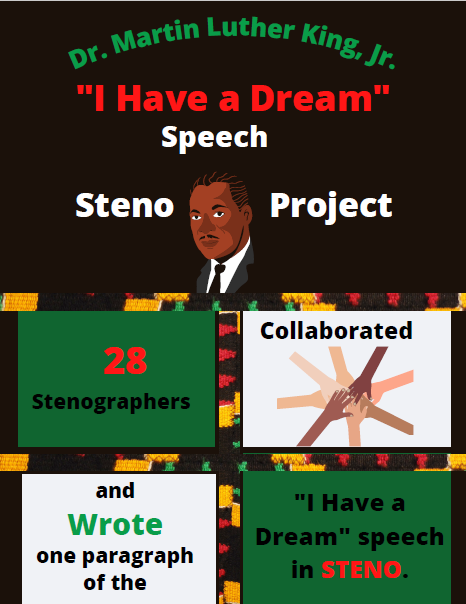 Last winter Margary Rogers, RPR, CRI, an official court reporter and CART captioner from Washington, D.C., and chair of NCRA’s Membership Committee, had the idea to write the “I Have a Dream” speech in steno in honor of Black History Month, Court Reporting & Captioning Week, and one of the greatest leaders in the nation’s history, Dr. Martin Luther King, Jr.

She put out a call for volunteers to take on writing one paragraph each from the speech. Twenty-eight stenographic court reporters and captioners (both professionals and students) later, Rogers has turned the final Martin Luther King, Jr. “I Have a Dream” speech steno project into a 20-page book that features a headshot of each participant and the paragraphs they wrote. The 20-page book is available for purchase for the cost of $25, with all proceeds going to support the Carl Sauceda Grant, named in honor of Carl Sauceda, FAPR, RMR (Ret.), of Hayward, Calif., a past president of NCRA and recognized throughout the industry for his legacy of giving back to others. (Unbeknownst to Rogers, she was named the first recipient of the grant at the 2022 NCRA Conference & Expo.)

Rogers said it took her about two days to plan and receive the paragraphs of steno notes in the correct form from everyone who participated in the effort. She then did all the artwork herself using a digital design tool.

“I created the display/outline for the paragraphs through an online graphics app. It was a little more tedious than I thought when formatting each paragraph page. It took me about two weeks in between completing some daily and expedited transcript orders. I would work on about three to five paragraphs a day, which would include font, size, steno columns, and ensuring that I copied and pasted the writers’ correct outlines as they had written them,” Rogers said.

“After I completed each paragraph, I sent it to the stenographer to review and ensure that everything was correct. Once they approved it, I moved on to the next paragraph. I had to make a few changes throughout the process. The project was completed on February 1, the first day of Black History Month,” she added.

Rogers debuted the books at the 2022 NCRA Conference & Expo and sold 20 books onsite, followed by another seven after the Conference ended. To date, a total of $675 has been raised through the sale of the books to support the Carl Sauceda Grant.

“Each book cost between $11 and $12 to print. I had 115 books printed. So once we sell all the books, I think we will raise about $1,300 to be donated to NCRF to support the Carl Sauceda Grant. I hope that everyone supports this project. It’s a great booklet that promotes our profession in a historical way,” Rogers said. She added that she also donated four books to NCRF for those who became Angels at the 2022 NCRA Conference & Expo.

Rogers said the responses from participants about the book have been very positive. Participant Ron Cook, FAPR, RDR, CRR, CRC, a freelance court reporter and captioner from Redmond, Wash., said the book was beautiful and thanked Rogers for putting it together and letting him be a part of it.

Participant Cassandra Ellis, RPR, CRR, a freelance court reporter and captioner from Silver Spring, Md., said: “This is so thoughtfully done and such a splendid idea. Everything you put together is always so wonderful, and I’m so happy I had an opportunity to play a small part.”

Copies of the book are available for purchase for $25. Ways to pay include:

Be sure to add “MLK Steno Project” in the note section when making payments.

If you would like to purchase a book, but you would prefer your book be mailed to you, please add $5 to your payment and provide your mailing address to: availableforyourevents@gmail.com.