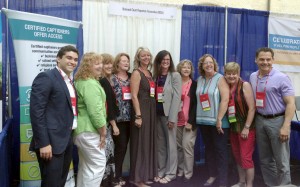 NCRA participated in the Hearing Loss Association of America’s annual convention held June 25-28 in St. Louis, Mo., as one of many exhibitors. Adam Finkel, Director of Government Relations for NCRA, represented the association at the event.

“Visitors to the booth were very interested in learning more about NCRA and the work its members do to support members of the hearing loss community,” said Finkel. “NCRA members who provide CART and captioning services provide an invaluable link to normal life for many of these Americans.”

According to the National Center for Health Statistics, 48 million Americans have some degree of hearing loss. NCRA has worked with HLAA for many years to address a number of issues through a strategic partnership in the Deaf and Hard of Hearing Alliance. 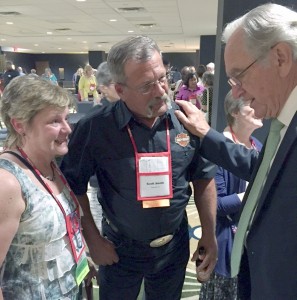 “To have the 1,000-plus HLAA attendees seeing the CART captioners at this event is extremely important, and the interactions between the providers and consumers are priceless and never forgotten,” said Deanna Baker, RMR, a broadcast captioner from Flagstaff, Ariz., and a member of NCRA’s CART Ethics Task Force.

Baker, who also captioned some of the sessions at the HLAA convention, said she has been involved with the organization and NCRA as well as other hearing health groups for more than 20 years, said the common issue of communication access among them adds strength to the support for other issues such quality captioning, realtime training, and hearing health initiatives.