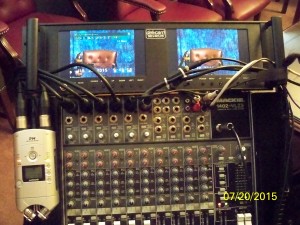 I like many things about being a CLVS, and near the top are the fine people I get to work with – not to mention that the importance of the issues at stake in a legal case can often make for high drama. It also is satisfying to try to continuously improve your game and learn from other videographers whenever possible. During my 23 years in the field, my “kit” has evolved many times to become what it is today, and perhaps my version will give you an idea you can use. In the pictures you can see the Panasonic HMC80 camera, a hi-def full feature camera at a reasonable price, that has served me well the past five years. That is connected to the rolling case with mixer, DVD recorder, and H4 Zoom recorder.

The advantages to this setup for me are two-fold. First, it keeps my stuff off the conference table. That piece of furniture is for the attorneys, and I don’t want to compete with their laptops, files and coffee cups for space. Second, the dual monitors not only show me the larger picture that I need for focus and composition, they allow me to compare the camera picture to what the DVD is recording. The Toshiba recorder gives an on-screen readout of elapsed time, record mode and active inputs, and instantly alerts to any problems. When it’s time to finalize, the extra screen makes it easy and quick.

The Mackie 1402 mixer has six XLR channels with phantom power to drive the AT831b lapel mics and boundary mic, with faders, mute, lo-cut filters, and full equalizing on each channel. The equalizers help reduce traffic noise and HVAC noise in most cases. The six channels allow for four lapel mics, a boundary mic, and the headset. The headset is a Beyerdynamic sportscaster’s model with boom mic, which gives on-camera announcements a certain punch that matches the other voices in the room, and makes life easy for the person who has to play it back in court. The cabling is split so that the boom mic can have an XLR male plug and the earcups have 1/4” male tip and sleeve for the mixer’s headphone jack.

The rugged case has large wheels, and everything can be loaded on top and strapped in place, so the trip from car to workplace can be managed easily. There is space in the lower section for mics and cables. This setup is quick, and everything is at your fingertips and – as an added bonus — nearly eye level. Although things can still go wrong, it will give confidence that you will be able to handle it. 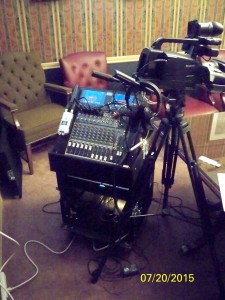 The one disadvantage is its sheer size: It can be hard to get up stairs if there’s no ramp or elevator, but most people can probably work around it. I have used this system for more than ten years.

One deposition that stands out in my mind was a hot summer day where there was no air conditioning, and the attorney insisted on opening all the windows. The traffic noise was deafening, but because I was able to easily mute all mics except the person speaking and open them instantly when necessary, it was manageable. The equalizers cut the traffic noise down even further. I don’t think we could have produced a usable video otherwise. On another occasion, there was a defect in the DVD-R disk, and an error message popped up instantly on the monitor. After inserting a new disk, we continued on uninterrupted. You can always produce a DVD from the SDHC card in the camera, of course, but catching the error quickly means less work later, and continuous redundancy is your only guarantee.

On another occasion, I was using a FireWire connection to the DVD recorder, and experienced an SD card failure, which was a new experience at the time. Because it appeared that the DVD recorder was still capturing everything, I waited until there was a pause in the testimony to go off record. Later I discovered that when using FireWire, audio ceases to be transmitted during an SD card failure, so I had about three minutes of video that had no audio. I was able to dub in the missing audio from the H4 recorder, producing a seamless audio track on the DVD. I never used the FireWire again after that experience.

We all plan to get to a location an hour early, but how many times has it happened that they keep you waiting, and only let you into the room 15 minutes before scheduled start? With this kit you can be set up and ready, and wouldn’t we all like to be heroes instead of apologizing? It has saved schedules and embarrassment in that way times without number. I have a similar setup for courtroom playback.

I don’t expect comments on my kit from attorneys; they have more important things on their minds. It’s not there to impress them. It’s there to deliver results, and it does, every time.

Kelly Boyd, CLVS, is an associate member of NCRA and is based in Ashland, Pa. He can be reached at legaleze@ptd.net.