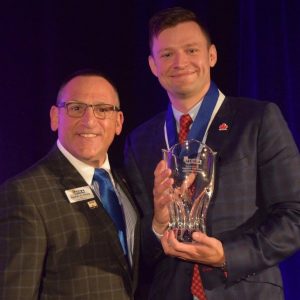 The JCR reached out to Jeffrey Weigl, RMR, CRR, CRC, a freelance court reporter in Edmonton, Alberta, Canada, about his Speed Contest win, practice techniques, how he dealt with Americanisms, and what it was like to be interviewed by the press.

What appealed to you about competing in the speed and realtime contests?

Ever since I began learning theory at Northern Alberta Institute of Technology (NAIT), I was astonished by the achievements and capabilities of all of the reporters who competed in the Speed Contest over the years. Looking back, it seemed completely unattainable, but it soon became a driving force for me knowing what was actually possible with machine shorthand.

I am enamoured with court reporting for so many reasons, but one of the most important is the fact that every ounce of effort we put into improving our shorthand skills pays direct dividends to our work on a daily basis: faster turnaround times, higher pay, increased variety of work, opportunities to travel, etc. Speed contests or NCRA certification exams are excellent concrete goals to put in our calendars every year to ensure that we work towards improving ourselves as reporters far into our careers. The future of our industry depends on it.

Do you have a preference on which one you would prefer to win?

My goal has always been participation and high achievement in the Speed Contest. I continue to strive towards finding superior ways to keep up with lofty dictation. My practice over the years has been entirely geared towards speed, not realtime; but being able to attain high speeds allows a comfort level at slower speeds, providing clean translation.

I am completely astonished by the achievements of the Realtime Contest winners. It is astounding what they are able to produce. I do not feel I would be able to seriously compete in both contests in the same year, as I would certainly alter my practice regimen and strategy were I to focus on realtime.

How do you find the two contests different?

The Speed Contest is one of abandoning thought, trying to let everything flow through my brain to fingers as expediently as possible without getting hung up on any one thing. Realtime is the exact opposite: You need to focus on verbatim translation, spellings, punctuation, capitalization, stacking, misstrokes. This past year, I somehow forgot to put my initial Q. at the start of my Q & A portion! That is a costly mistake when facing stiff competition. Everything matters.

Can you tell us a little about whether you had to deal with any spelling issues between Canadian and American English?

The NCRA staff has been excellent in accommodating this issue. While I am cognizant of common spelling differences like color/colour or honor/honour, certain things do arise that can throw me off. The biggest challenge by far is being unfamiliar with American terminology related to the legal system down south as well as not having briefs for all states, cities, and the like. As an example, in Canada we have the Court of Queen’s Bench, which is a one-stroke brief for me. I do not currently have any shortcuts related to terminology used in American jurisdictions. Unfamiliarity with terminology can really throw you off at high speeds. This past year’s Q&A portion included Tulane University in New Orleans, which I was unable to confirm the spelling of with just a dictionary. I had never heard of it before and just wrote it phonetically, but I won’t ever forget it now!

Have you been practicing for the upcoming contests?

I strive to always work on my theory daily on the job, shortening and refining it. I was a product of a “writing things out and having a small dictionary” school of thought, learning few briefs and less phrasing from the get-go. Implementing some basic phrasing over the last three years has been such a boon to my writing. I will not begin focused speed practice until a month or two out from Las Vegas, ramping practice up as the contest nears. In 2016, I started practicing further out, and I found I began second-guessing my writing and just got burnt out on practicing in general.

What advice would you have for a person who has never been in a speed contest before? How can they get started?

Urge your state associations to host local contests at slower speeds! The Alberta Shorthand Reporters Association (ASRA) hosted Mark Kislingbury, RDR, CRR, the year after I graduated from NAIT, and that was his suggestion to us. That was the starting point of my speed writing addiction. Find the fun in it and appreciate the fact that while you may not reach all of your speed goals, any effort you put into training will pay you dividends in the real world.

You’ve received quite a lot of coverage in Canada based on your win. Can you tell us a little bit about that?

Following the NCRA’s news release to Canadian media outlets, I was featured in two prominent Edmonton papers. It was a pleasure chatting with the author, as there is a genuine interest in what it is that captioners/court reporters do and how our “weird little machines” work. Following a positive response to that first article, I was contacted by several other outlets and participated in another online write-up and video, two primetime radio interviews focusing on “Who Does That Job,” and a lengthy featurette on a national news program including both an interview and a mock Questioning (Deposition) with two lawyers, a witness, and me providing realtime for both parties.

While the attention was certainly unexpected, I was honoured and endeavored to take all opportunities presented to educate the public about our profession in general, what it is we do, and why it is so important. I heard that a couple other radio stations discussed the contest and had listeners calling in showing how fast they could talk. The overwhelming reception to everything I was involved in was a genuine interest and excitement towards our profession. My thanks goes out to the NCRA for putting me in a position to be able to advocate for our profession in such an organic way.

Do you feel you have been able to be an advocate for the profession?

Easily the most important result from winning the Speed Contest has been the opportunity to inform the public on what it is we do, why it’s important, why we are the best option for capturing the record, and why we’re here to stay. It has always been a very personal goal of mine to win the contest, thinking it would also be a good way to advertise to potential clients. But being given the opportunity to educate the public and advocate for the profession has been so much more important and rewarding.

Further, there has been an incredibly positive response amongst both my CART and legal clientele, and they are proud to work with a firm and reporter that continually strives to provide superior services to them. I hope I can inspire other reporters to follow my lead, always improving our skills and expertise for both ourselves and the people we work for.

Is there any advice you can give to other NCRA members on how each of us can be an advocate for our profession?

We all understand our profession, but oftentimes we are not very good at clearly and concisely explaining what it is we actually do, the challenges we face on the job, why we are so important, and why we are a better option than voice recognition or recordings. If you don’t have practiced answers to each of these questions, speak with your colleagues, attend your state association events, and most importantly attend NCRA events. In my experience, the public is always interested in what we do; we just need to know how to best explain it.

Any questions we missed or should have asked?

My thanks go out to my family for their support; my father, Jerry Weigl, who reported for a decade and spent the rest of his career teaching with NAIT’s Captioning & Court Reporting Program; the amazing NAIT instructors; my wonderful colleagues in the ASRA; and all of the speed writing friends I have made at NCRA events who share the same passion for shorthand as I do.

As with just about everything else, the COVID-19 pandemic will contribute to delays in processing tax returns and refunds. ... See MoreSee Less

Good news and bad news for tax season January 18, 2022 The Internal Revenue Service (IRS) has announced that tax season will start early this year, with Jan. 24 designated as the first day they will s...
View on Facebook
· Share

Don’t miss the savings! The recorded sessions from the 2021 NCRA Business Summit held in Savannah, Ga., last November are now available for purchase in the NCRA Learning Center. Get those CEUs you need, especially if you filed an extension➡️ bit.ly/3nH8E88 ... See MoreSee Less

The National Court Reporters Foundation is pleased to award five Career Launcher Student Grants today thanks to the generosity of the Utah Court Reporters Association. Learn more or apply to be in the next drawing in April: bit.ly/3GJh9Hf ... See MoreSee Less

The Distinguished Service Award encourages and recognizes work amounting to distinguished service by individual members of NCRA for the benefit of the reporting profession. Learn more and submit nominations: ncra.org/awards/dsa ... See MoreSee Less