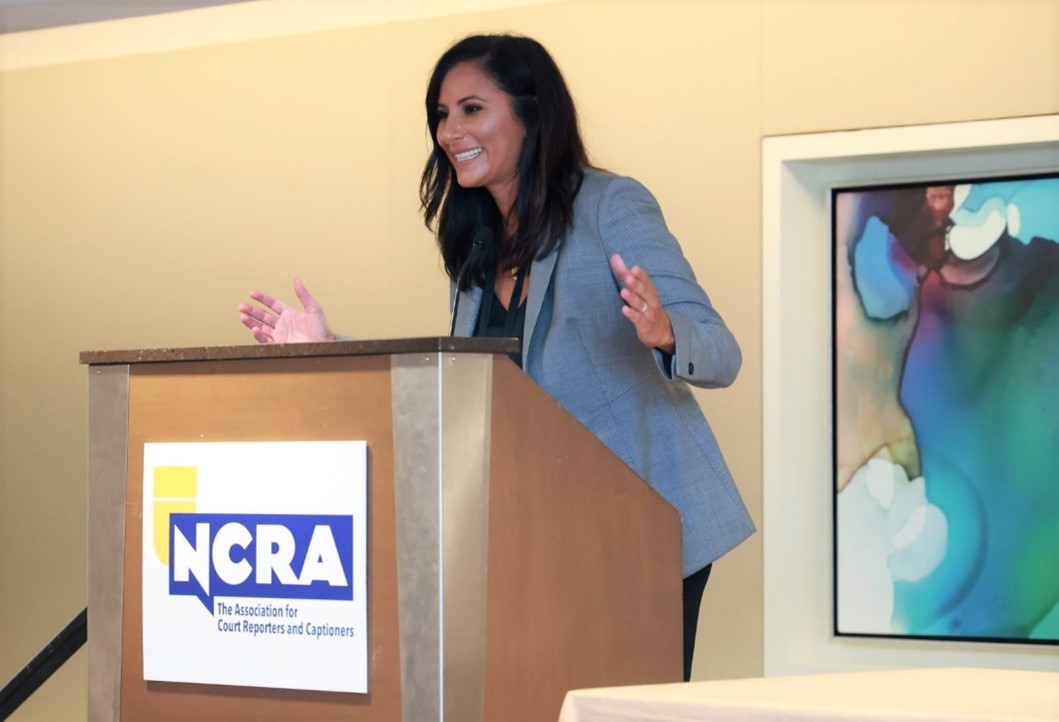 A large crowd squeezed into the packed session room to hear Judge Judy’s on-air court reporter share her story that started with disappointing her parents and landed her on national television. After high school, Whitney Kumar’s mom cried when she told her that she wasn’t going the traditional route. “Mom, Dad,” Kumar recalled saying recently to her parents … “Could you imagine if I had just gone to college and gotten some boring job? Now I’m working with Judge Judy and winning Emmys!”

Kumar took a winding path to stardom, but at every crossroads she said yes. As a young reporter, she covered the depositions of Britney Spears, Mel Gibson, and other Hollywood stars. Then she pushed herself to try something new and became an official in the Los Angeles Superior Court. During one of her first trials, a high-profile divorce case, one of the attorneys asked for realtime. She had never done realtime before, but she said yes. Over the weekend, Kumar went home and Googled: “How do you do realtime?” and by Monday morning she had become a certified LiveNote reporter. After the trial, the lawyer said, “That was the best realtime I’ve seen in my life.”

“Just put yourself out there,” Kumar kept telling the audience.

Within five years, the LA court system started laying off official reporters, and Kumar pivoted again. She and her twin sister, Kamryn Villegas, started their own court reporting firm, KW Court Reporting. Kumar knew nothing about running a business, but she learned quickly. During the pandemic, other firms were going out of business and KW started to acquire them. Lawyers needed remote depositions. KW embraced technology and became known as the go-to remote depo firm and became expert in electronic exhibits. She said yes and she learned.

In 2021 Kumar got a call from the producers of Judge Judy’s new show on Amazon, Judy Justice. She was nervous to audition but she said yes, and she got the job. She didn’t think she was going to be on camera, or even miked up. But there she was, doing readback for Judge Judy.

“I can’t believe I’m sitting here next to Judge Judy,” Kumar recalled thinking, “taking down the record. I’m even parking down the street from her house, going to dinner parties at her house, winning an Emmy!”

An audience member viewing the session via livestream asked Kumar if she is ever recognized out in public or if she has ever been asked for her autograph.  She hasn’t, despite there being a larger-than-life promo billboard for the show with her picture on it in downtown Los Angeles.

Kumar’s parting advice: “Be open to where your career can take you. Just say yes and you can figure it out. Make yourself uncomfortable.”

Judy Justice is available to stream on Amazon’s IMDb TV.