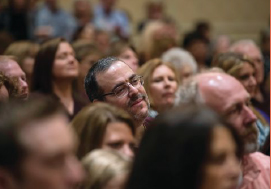 For many reporters, NCRA’s Convention & Expo is not only a great way to catch up with colleagues but the premier opportunity to learn new skills and track emerging trends in the profession. Attendees at this year’s event experienced a jam-packed educational schedule that not only covered a wide range of topics but also delivered the information in various styles and with best-in-class presenters. In addition to the sessions highlighted below, convention attendees also had the opportunity to learn about Cloud storage, wireless set-ups, punctuation, stadium captioning, and much more.

THE INTERNET IS A CAPTIONER’S BEST FRIEND

Attendees explored the value of the Internet and how best to leverage its unlimited resources at this interactive session led by seasoned court reporter, captioner, and CART provider Alan Peacock from Mobile, Ala. Participants were encouraged to join the conversation and tweet their ideas before, during, and after the session, as they explored the endless search sites available online, including YouTube, news sites, and specialized sites that can accurately identify an unfamiliar term, song lyrics, and even the correct pronunciation of the name of a public figure such as a politician or an athlete. Attendees also learned how to setup a wireless hotspot to ensure quick access to the Internet no matter where they’re working.

A FUTURIST LOOKS AT THE FREELANCER

Changes in economic conditions, the advancement of technology, and evolving trends that are often viewed as threats just as often lead to opportunities, according to Adam D. Miller, RPR, CRI, CLVS, a freelance court reporter who has worked for a decade in Philadelphia and Wilmington, Del. In his presentation, “A Futurist Looks at the Freelancer,” Miller provided several examples of changing times once perceived as threats, such as the launch of the Internet, that have ultimately created opportunities for the court reporting profession. Once feared, the Internet is now relied on instead of a telephone book, a dictionary, and other once-popular resources. In addition, the Internet has led to court reporters being able to stream live video and audio and conduct deposition work where parties are no longer required to be in the same location. A current threat to the court reporting profession is the declining number of public sector jobs, warned Miller. But he advised attendees to seize the opportunity in the threat and work to identify new areas to which they can bring their unique skills as freelance reporters. 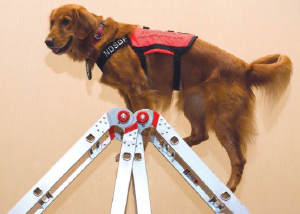 What does a court reporter have in common with a search dog? “A nose for truth, acute hearing, and swift paws. No bones about it,” said Chris Bergquist of the Sacramento Fire Department. The Search Dog Foundation, based in southern California, takes in difficult-to-place stray dogs and trains them to find live human survivors of catastrophic events. During their presentation, search dogs Elvis and Kari demonstrated some of their techniques by finding a child hidden in a tube and climbing along difficult surfaces. “They know it’s real life; they know it’s serious. The dog will not quit,” said Elvis’ handler, Chet Clark of the Oklahoma Task Force 1 team. The search dogs provided the demonstration at NCRA’s convention in honor of Atlanta court reporter Julie Brandau, who was shot and killed in her own courtroom. In her memory, the Julie Brandau Community Service Memorial Project partnered with the Search Dog Foundation because of Julie’s life-long love of dogs. To date, the project has raised more than $80,000 for the Search Dog Foundation.

TEACHING AND MENTORING: THE KEYS TO THE FUTURE OF THE PROFESSION

A panel of educators and NCRA board members led a lively discussion of how individual court reporters can do their part to help attract, retain, and train court reporting students to ensure the profession remains healthy and viable. Nativa P. Wood, RDR, CMRS, an NCRA board member and official court reporter with the Dauphin County Court of Common Please, Harrisburg, Pa., provided an overview of the work of NCRA’s Vision for Educational Excellence Task Force. Its goal is to help invigorate and promote the court reporting profession. In addition, NCRA Vice President Glyn Poage, RDR, CRR, a court reporter from Helotes, Texas, noted that court reporting students view working court reporters as walking success stories and offered a number of suggestions on how NCRA members can better support court reporting schools and students. Also on the panel were Kay Moody, CRI, MCRI, CPE, director of education for the College of Court Reporting, who offered insights into recruiting and training tomorrow’s court reporting professionals, and Jeff Moody, CRI, president of the College of Court Reporting, who explained the certification process at the state and national levels, as well as NCRA certifications.

BRINGING CART TO YOUR COMMUNITY

With the help of local closed captioner and CART provider Karyn D. Menck, RDR, CRR, CBC, CCP, the Hearing Loss Association of America Nashville Chapter has successfully brought CART and captioning technology to a variety of community sites including live theater, leisure and recreational activities, educational events, and religious venues. Menck, owner of Nashville-based Tennessee Captioning, and Kate Driskill Kanies, president of the HLAA Nashville Chapter and state coordinator for Tennessee, shared their experiences with an ongoing promotion of captioning services, as well as tips on how to launch a similar effort at the local level. The speakers also explored with attendees how to obtain grant funding for equipment and software to provide the services, and how to create a successful blueprint that will lead local venues to collaborate with captioners and CART providers on a onetime, free trial basis, to help determine if such services are needed.

In recent years, the U.S. Marshals Service has seen an increase in violence in courthouses. In a presentation designed to educate court reporters and members of the court family about safety and security, John Shell, senior inspector for the U.S. Marshals Service, provided attendees with valuable tips and best security practices, such as coping in an active shooter situation, recognizing an active shooter in the vicinity, and following evacuation plans. In addition, Shell gave his insights into best practices for responding to law officials when they arrive at a the scene of a shooting, training tips for keeping staff safe in violent situations, and precautions to take to help to prevent violent crime from happening in a courthouse.

An interactive panel that included Carol Studenmund, RDR, CRR, CBC, CCP, Amy Bowlen, RDR, CRR, CBC, Darlene Parker, RPR, and NCRA’s Assistant Director of Government Relations Adam Finkel led a discussion on the issues behind providing the captioning services that allow all individuals to have access to news broadcasts, sporting events, entertainment, and other television programming. Frequently cited was “Captioning Matters: Best Practices,” a working document that outlines NCRA proposals to ensure that broadcast captioners, captioning companies, and video programming distributors are providing the most accurate, understandable, and timely captions for the end user. The best practices project specifi cally covers live, realtime captions rather than captions created in the post-production phase of video production. Currently, postproduction captions are expected to be 100 percent accurate with no exceptions. However, for live realtime or near-realtime captions, 100 percent accuracy is not a reasonable expectation. According to the panel, in October 2010, the Federal Communications Commission found that 70 percent of all complaints regarding captioning involved transmission errors. Despite the need to address these errors and how they unfairly affect accuracy rates, the panel encouraged captioners to hold themselves accountable to provide the most complete, factual, and accurate captions possible.

BRIEFING ON THE FLY FOR FASTER WRITING

Kimi George, RMR, a freelance reporter specializing in medical malpractice depositions, and author of the book Flip Over Briefs, encouraged audience participation in a session that examined the differences between left brain and right brain and asked whether court reporters are more right or left brain dominated. George told attendees that she believes reporters use both sides of their brain because they use their critical thinking (left side of the brain) to determine that they need a brief, followed by their creative thinking (right side of the brain) to create a shorter outline or a brief. Some reporters are better at briefi ng than others, according to George, because they have successfully trained their brains to create new outlines quickly. Because the brain is a muscle, George told the audience that they too could enhance their skills by training their brains and offered tips and strategies for creating new outlines faster, including practicing consistency in briefs, making main briefs the same every time before adding endings, and keeping things simple. She also suggested leaving out vowels and provided additional tips for writing medial briefs.