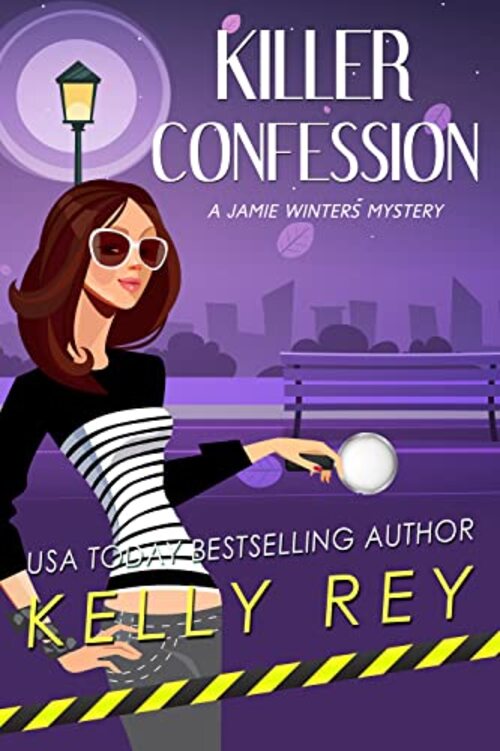 Jamie Winters, a legal secretary and reluctant sleuth, is at it again in Killer Confession, the most recent in a series of mystery novels authored by NCRA member Kelly Nasuti, RDR, CRR, CRC. This latest installment, released May 24, marks the seventh mystery by Nasuti, a full-time captioner and CART provider from Somerdale, N.J., who writes under the pen name Kelly Rey. The novel is published by Gemma Halliday Publishing.

According to Nasuti, in Killer Confession Winters might have thought her hectic life was about to slow down … but she was dead wrong.

Vicious Vic Hartman is the tabloid Grapevine’s star reporter and celebrity host of television’s Grapevine Live. But he’s made lots of enemies on his climb to the top of the trash journalism heap, so when he’s found murdered after a party at his home, there’s no shortage of suspects. Which is why the victim’s family hires Winters and her sassy teenaged sidekick Maizy to figure out just which one of the not-so-grieving is his killer.

Between Vic’s intimidating boss, a bitter ghostwriter, an unscrupulous would-be replacement, a jilted girlfriend, and an assortment of disgruntled neighbors and family members, the dynamic duo have their work cut out for them — not to mention trying to avoid the menacing Lincoln Park Loper and a creepy doll named Tara who may or may not be stalking them! Can they find the killer … before they become the next victims?

“Writing isn’t really a choice for me; it’s something I’ve done my whole life and, for better or worse, is imbedded in my DNA, like music or art is to the folks fortunate enough to enjoy those gifts,” Nasuti said. “I can’t imagine not doing it, even if it was just for my own consumption, because when it goes well, the feeling of rightness is exhilarating. When it goes poorly … well, let’s not go there!”

Motion for Murder, Nasuti’s first mystery novel, released in 2014, introduced readers to Winters in a story laced with humor, wit, a dose of romance, and a murder. In Nasuti’s second novel, Motion for Malice, Winters solves the murder of Dorcas Beeber, a psychic medium who was found dead from an apparent blow to the head by her own crystal ball.

Winters tracks down clues to solve the murder of Kay Culverson, a low-budget cable talk show host who is found dead in her office in Motion for Madness, the third novel in the series. In Motion for Mischief, Nasuti’s fourth novel, Winters solves the murder of Oxnard Thorpe, the Adult Diaper King of New Jersey and one of her firm’s most important clients, after he is found dead in the swimming pool of his sprawling mansion on his wedding night.

In A Playboy in Peril,  Winters has never heard of Virtual Waste, a local New Jersey Pinelands area band, until their drummer is murdered backstage at a show and Winters’ teenaged sidekick, Maizy, sees the killer. While Winters’ landlord, Curt, fills in with the band, Winters and Maizy must deal with the victim’s disgruntled bandmates, discarded groupies, an ex-Marine bouncer, an unhinged Einstein look-alike, an emotionally overwrought agent, an ill-tempered giant, and even the Jersey Devil as they track down the killer before Maizy becomes the next victim.

In Death by Diamonds, the sixth in the mystery series authored by Nasuti and released in 2020, Winters realizes that diamonds are not always a girl’s best friend when a dead body shows up on her boyfriend Curt’s patio … with a pocket full of diamonds! The dead woman was an old college friend of Curt’s, and the deeper Winter digs, the more it appears someone was out to get her. With the help of her teenage sidekick, Maizy, Winters tries to determine if Amber, the dead woman, was an innocent victim or a jewel thief.

Nasuti, who has been a court reporter since 1983, operated as Regional Reporting, Inc. until 2005 when she joined VITAC. She is also a member of Sisters in Crime, a group that promotes the ongoing advancement, recognition, and professional development of women crime writers.

All of Nasuti’s books are available in e-book format for Amazon Kindle, Barnes & Noble Nook, iBooks, Kobo, and Smashwords. They are also available in paperback at Amazon.com, CreateSpace.com, and other online retailers.